I recently celebrated my third anniversary with my husband with a traditional jazz brunch in New Orleans at Arnaud’s.

New Orleans is one of the top five food cities in the world. I say this being a foodie and eating my way across 57 countries on this planet. New Orleans continues to WOW me. BUT, there are also a lot of tourist traps and restaurants that rest on their laurels.  We’ve tried several of the famous restaurants and been disappointed by a few.

Arnaud’s did not disappoint. It was the perfect jazz brunch experience.

Located in the French Quarter, this historic restaurant honors dining the way it used to be with white linens on the tables, an incredibly attentive and polite wait staff, real fresh baked bread, and attention to detail. You will see staff making an array of desserts and drinks tableside, which is always fun.

And of course, there’s live jazz.

The restaurant is adorned with historic black and white photos. There’s a lot of natural light. It was exactly what I wanted.

We enjoyed a four course brunch. The price of the brunch is determined by the entrée you order and can range from $32.50 to $45 but choices also range from eggs to crab cakes to filet mignon.

We started with shrimp Arnaud’s, which was fresh shrimp heavily coated in remoulade sauce. I enjoyed it.

Next, we ordered the chicken and andouille gumbo and it was excellent. My husband has to try the gumbo at every restaurant because he makes exceptional gumbo and likes to compare his gumbo to others (and feel superior knowing his is usually better). Having said this, we eat  A LOT OF GUMBO, so we are good judges and this one ranked in the top 3.

For the second course, we had the house salad, which was just ok.

For the main courses, my husband had Grillades and Grits, which was flash-seared baby veal scaloppine braised in a rich vegetable sauce and seared cheese grits cakes. I normally don’t like grits, but searing them added a lot of texture. The Grillades were fantastic. 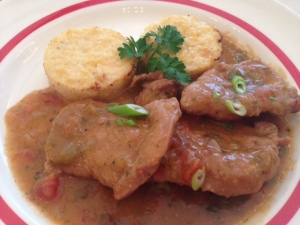 I ordered Eggs Houssard, which was poached eggs, Canadian bacon and  and tomato on French Bread crostini with Hollandaise and Marchand de Vin Sauces, and it was good, too. 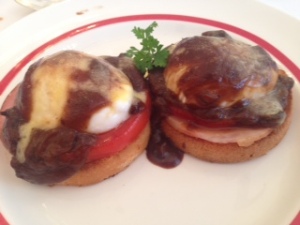 The highlight of the meal was the Crepes Suzette made tableside. So few places serve this anymore and it’s one of my favorite desserts. It was excellent. 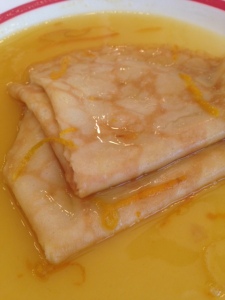 And the drinks were not outlandish.   We enjoyed a Sauvignon Blanc for less than $40. Mimosas were about $7.50. 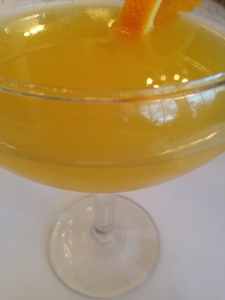 If you’re looking for a wonderful brunch, try it:

Now, as for some of the other places we’ve tried in the past few years. Our most expensive meal and biggest disappointment was Commander’s Palace, which is an historic giant in this city.

Frankly, it’s been over hyped. I hate criticizing restaurants because sometimes it’s just a bad night, but I feel fair in doing so here because we ordered an assortment of food and were not impressed with anything other than the dessert soufflé. Plus, we spent more than $200 on the meal. Ouch.

You need a suitcoat to eat dinner here, so we bought one on vacation which was another expense.

Although Arnaud’s is fancy, I never felt like it was stuffy and I felt like Commander’s Palace was very stuffy.

When we pulled up, there were tour buses out front which immediately turned me off

The meal was mediocre. We had mach choux and we make much better mach choux than that. I had red dish and that wasn’t memorable at all. The gumbo was mediocre. The foie gras was the worst I’ve ever had. It was a seriously disappointing meal.

Another classic restaurant we’ve visited is Court of Two Sisters and I had mixed feelings about it (although it’s highly acclaimed).

It boasts a classic jazz brunch but it’s a buffet and I don’t care for buffets, so I was disappointed.

I will say the atmosphere was wonderful. It was bright, had a beautiful courtyard, and the selection of food was enormous.

While variety is nice, you can’t keep up quality when you mass produce food so I always prefer a la carte meals. Dinner here is a la carte so I’d be willing to give it another chance. One thing I will say about this place, if you’ve never tried Cajun and Creole food then this is a good spot because of the variety of choices. The turtle soup was lovely.

If you like buffet, try it. If not, try Arnaud’s. http://www.courtoftwosisters.com/

A place I didn’t expect to be that good, but was was Emeril’s Delmonico. I expected it to be overly touristy and thought the restaurant would be successful because he’s a celebrity chef, not necessarily because the food is great, but the food was fantastic. It’s over the top and I enjoy that from time to time.

I have never been a huge fan of Muffaletta sandwiches because they are overly salty and taste really fatty. My version of the muffaletta is scrumptious. I omit the ham, add chicken, use the mayo to add a creamy flavor and temper the saltiness of olives.  Instead of chopping olives, I simply open a jar of olive tapenade. I prefer green olive tapenade in this recipe.

The chicken adds lean protein to this sandwich and I use less salami than a traditional Muffaletta, so it has less fat. I enjoy this toasted, which makes the bread crusty, cheese gooey and sweats some of the fat off the salami. But you can eat this cold and if you do, it becomes one my “10 minute” recipes. It’s a great, easy sandwich either way. Enjoy.

Stir together mayonnaise and olive tapenade. Divide the mixture in thirds and spread on the bread. Sprinkle cheese and chicken over hoagies and add a dash of Italian seasoning to each. Top each with two slices of salami.

Bake for 5-7 minutes until cheese melts and bread is toasty. Serve immediately. 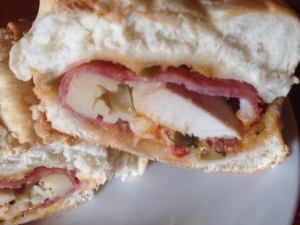